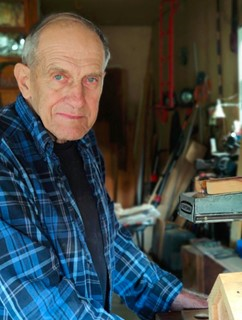 Please share a memory of Cyrus to include in a keepsake book for family and friends.
View Tribute Book

On Wednesday, December 21, 2022, Cyrus Ward Blade, loving husband, father, grandfather and great-grandfather, and friend, passed away at the age of 84, surrounded by family.

Ward was a life-long family man, committed to his family, his friends and his orchards.  He was born in Liberty NY,  the son of Gladys Muhlig Blade and Cyrus W. Blade, Sr, brother of Gloria Blade Hansen-Cox, all of whom preceded Ward in death. He attended Liberty High School where he excelled in football, basketball, baseball and track and field.  He was a talented singer (a talent he shared more readily in his younger days) and his family remembers him crooning away to what we called “the oldies”.  Ward was an avid sportsman/outdoorsman, tireless woodworker, and a talented fly tyer and fisherman.  Ward learned to tie flies from a master of the craft, Roy Steenrod, and only in his later days did he learn what a gift that truly was.  Ward attended SUNY Delhi majoring in Civil Engineering and soon after, while coming back to Liberty to support the home-town team, he met his wife of what would come to be 61 years, Sandra Wertman. Ward worked for New York City Board of Water Supply as an Assistant Civil Engineer for over 30 years where he oversaw reservoir operations for the New York City Water Supply System.

Sandy and Ward married in 1960.  Soon after came Melissa, Cort, Heidi and Amanda…and Ward’s days were filled with life changing events such as building the family home in Neversink, planting a 20-tree apple orchard, coaching little league, participating on the Board of Education at Tri-Valley, attending softball games, and planting a 100-bush blueberry orchard. Ward’s family was spoiled by an abundance of fresh fruits, vegetables, home-crafted maple syrup, freshly made apple sauce and any bounty Ward could coax from the ground. He found himself with little spare time after keeping up with his active family and busy “gentleman’s farm” but when he did find time he liked to spend it on the links with a few of his closest friends.  Ward was always willing to lend a helping hand and will be deeply missed by those who knew and loved him. May he rest in peace.

Private services will be held by the family at a later date. In lieu of flowers the family has requested that donations be made to the Neversink Ambulance Corp.

To plant a beautiful memorial tree in memory of Cyrus Blade, please visit our Tree Store

Look inside to read what others have shared
Family and friends are coming together online to create a special keepsake. Every memory left on the online obituary will be automatically included in this book.
View Tribute Book
Services for Cyrus Blade
There are no events scheduled. You can still show your support by planting a tree in memory of Cyrus Blade.
Plant a tree in memory of Cyrus
Share Your Memory of
Cyrus
Upload Your Memory View All Memories
Be the first to upload a memory!
Share A Memory
Plant a Tree