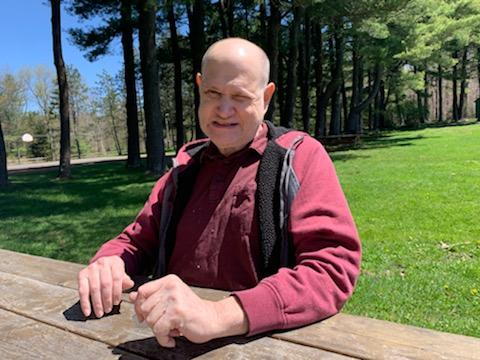 Please share a memory of Robert to include in a keepsake book for family and friends.
View Tribute Book
It is with a heavy heart that I inform you that Robert Gusikoff passed away early this morning at Garnet Medical health Center. He was the son of the late Albert Gusikoff and Sona Stein, born on February 26, 1956 in New York, NY. He was 66. Robert was a member of the New Hope Community Family since 1976, when he joined at the ripe age of 20 years old. Robert developed close relationships with many staff members and peers, living originally at the hotel, then moving to Heiden Rd and finally settling in to 307 Stupell Circle in 2013. He was an outspoken man, who never beat around the bush and advocated well for himself. He liked what he liked, and he let you know when he wanted waffles for breakfast, to go to McDonalds or to the gas station for a soda. Robert loved going to work and getting paid on Fridays, when he looked forward to getting his ISP, in all single dollar bills please. He was perhaps best known for the suspenders he always wore and a smile that, although rare, could light up any room. Robert also took pride and found comfort in being actively involved in the ceremonies, holidays and practices associated with his Jewish faith, which was an integral part of his life. Robert will be greatly missed by everyone whose life he touched. More details will follow regarding services and arrangements. A burial will be held on Friday, September 16, 2022 at United Hebrew Cemetery in Staten Island, NY. Arrangements under the care of Colonial Memorial Funeral Home, for further information call 845-434-7363 or visit www.colonialfamilyfuneralhomes.com
To plant a beautiful memorial tree in memory of Robert Gusikoff, please visit our Tree Store

Look inside to read what others have shared
Family and friends are coming together online to create a special keepsake. Every memory left on the online obituary will be automatically included in this book.
View Tribute Book
Share Your Memory of
Robert
Upload Your Memory View All Memories
Be the first to upload a memory!
Share A Memory
Plant a Tree