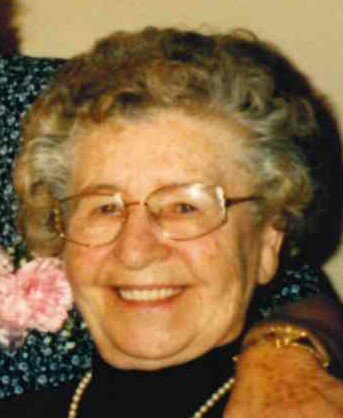 Please share a memory of Marianne to include in a keepsake book for family and friends.
View Tribute Book

Marianne Walter, of Monticello, passed away on August 25, 2022 at The Grand Rehabilitation and Nursing Facility in Poughkeepsie.  She was 99 years old.

Marianne was the daughter of the late Alfred Heid and Augusta Welwein, born on April 16, 1923 in Dortmund, Germany.

During her life, Marianne worked many jobs, most of her time as a hostess for Howard Johnson Restaurant in Liberty, NY, but before she came to the United States she worked as a nanny for a family in Paris, which began her journey to the US.  She married Hans in August of 1955 and they began their life together in a new country.  After they made their way to the US at the age of 32, she was very involved in her church and worked garage and rummage sales to benefit her faith community, as well as the gift shop in the United Nations building in New York City.  Eventually she and her husband made their way from New York City to the Catskills in 1964, where both she and Hans worked in several hotels; anyone who knew them knew they were both very hard workers. Marianne took great pride in her home with Hans.  In her free time she was a member of the Monticello Senior Citizens and a member of the St. Paul’s Evangelical Lutheran Church in Liberty, NY. Marianne enjoyed her trips with Hilde and Petra to Canada, Mohonk, and the racetrack.  Taking day trips to enjoy the Catskill scenery and time with friends was a favorite pastime.  Being social, she also enjoyed her coffee klatch. She was a loving sister, aunt and friend to all who knew her, and she will be deeply missed.

Arrangements are under the care of Colonial-Ramsay Funeral Home, 275 South Main Street, Liberty, NY. For additional information, please contact the funeral home at 845-292-7160 or visit the website at www.colonialfuneralhomes.com.

Look inside to read what others have shared
Family and friends are coming together online to create a special keepsake. Every memory left on the online obituary will be automatically included in this book.
View Tribute Book
Share Your Memory of
Marianne
Upload Your Memory View All Memories
Be the first to upload a memory!
Share A Memory
Plant a Tree