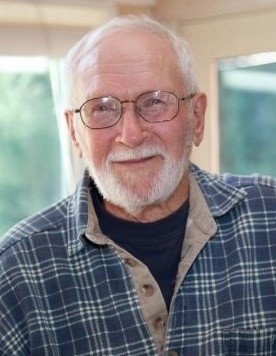 Born and raised in Hamburg, New York, Joe was the son of Joseph Francis Schick and Marcella Slater Schick. He was married to his high school sweetheart Joan Donhauser Schick for 51 years.

A veteran of the Korean War, he proudly served in the Army for two years. Upon returning  home, he studied advertising and design under the GI Bill. After receiving his BA from the Rochester Institute of Technology, he moved to New York City and started his advertising career.

Joe worked at a number of major Madison Avenue agencies including J. Walter Thompson. As a Creative Director for over 20 years, he developed many successful campaigns for Kodak, RCA, Ford, Congoleum, Mercedes, Chase and AT&T.

An avid outdoorsman, Joe moved from Fair Lawn NJ and retired for the next 25 years in Roscoe where he was active in the Lion’s Club, Republican Club, Catskill Mountain Archers, Trout Unlimited and the United Church of Roscoe. He also had a flyfishing school there for many years as the famous “Whitecloud”.

His artistic sensibilities and the outdoors often overlapped and Joe would enjoy painting and photographing his beloved Catskills.  He also enjoyed sports, especially the Buffalo Bills and even played semi pro football himself.

He had a great love and respect for the outdoors and you could often find him on the local rivers and mountains. But what truly mattered most to Joe was his family, friends and community.

Arrangements were under the care of Colonial Memorial Funeral Home, for further information please call 845-439-4333 or visit www.colonialfamilyfuneralhome.com.