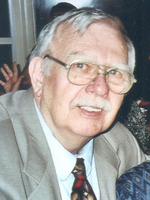 Nicholas "Nic" Pierce, of Pine Bush, passed away on August 26, 2021. He was 79. He was the son of the late Edward C. Urtnowski and Hazel C. Pierce Urtnowski born on March 8, 1942 in New York, NY. Nic served in the US Navy in 1960. He was an Engineer by trade. A licensed electrician for the City of Port Jervis. He was an avid user of the public library because he had a love of reading. He grew up and lived at Yankee Lake NY. His hobbies were bicycle riding in his earlier years, woodworking and playing chess. He also enjoyed eating at the local restaurants. He leaves behind to cherish his memory his brother Conrad Pierce. His niece Carla Kerper and Nephew Rob Tucker and many good friends. He is predeceased by his devoted wife, Christine Pierce, who passed away earlier this year. A visitation will be held from 2 to 5pm, a Celebration of Life at 4:45pm on Sunday, August 29, 2021 at Ralston-Lippincott-Hasbrouck-Ingrassia Funeral Home, 72 W. Main Street, Middletown, NY 10940. A funeral service will be held at the funeral home on Monday, August 30th at 10am. Burial will follow at Westbrookville Cemetery. Arrangements under the care of Colonial Memorial Funeral Home, for further information call 845-434-7363 or visit www.colonialfamilyfuneralhomes.com